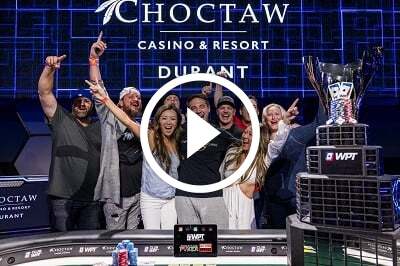 Long-time poker pro and founder of Chip Leader Coaching, Chance Kornuth finally added a WPT trophy to his impressive poker resume. The 35-year-old player came out on top of the 787-entry field to take down the 2022 World Poker Tour (WPT) Choctaw $3,800 Main Event for his career’s sixth-largest live score worth $486,600. Steve Buckner placed runner-up for $320,000.

While this was Kornuth’s third final table appearance at a WPT event, it is the third tournament that Kornuth, a three-time WSOP bracelet winner, has won in 2022. It also happens to be his fifth FT finish this year and has boosted his total career earnings to $10,384,169.

An elated Kornuth tweeted about his victory, sharing an image with his friends and family post-win.

The first player eliminated on the final table was James Mackey in sixth place after his failed to catch up with James Hundt’s .

Next to join the rail was Kristen Foxen. Foxen went all-in with and Chance Kornuth made the call with . The board gave Foxen a pair of aces, but Kornuth hit two-pair to knock Foxen out.

After almost ninety minutes of play, James Hundt shoved on the flop, with . Steve Buckner called with . The on the turn gave Hundt trip eights, but the on the river gave Buckner a diamond flush to bust Hundt out of the final table.

Soon after, Ray Qartomy fell out in third place after his ran into Chance Kornuth’s .

The heads-up play began with Chance Kornuth holding more than a 2.5:1 chip lead over Steve Buckner. The heads-up proved to be a long-drawn affair and lasted for over four hours. In the final hand of the tournament, Buckner shoved , and Kornuth called with . The board gave Kornuth a pair of aces, and Kornth claimed his first-ever WPT trophy!