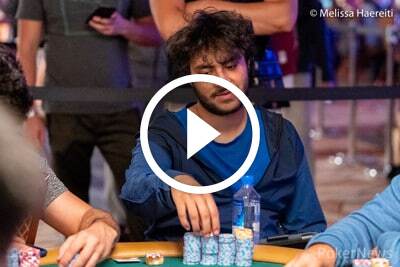 Remember when we had said that the cheating controversy was far from over? Well, Martin Zamani is back, and this time he has receipts!

On May 4, Zamani tweeted screenshots of Telegram messages as proof of some of the claims he made against Bryn Kenney in the Doug Polk podcast.

Here are receipts disproving somethings @BrynKenney said on the @PokerNews interview with @AuntyChardonnay who was the only person he was willing to be interviewed by. BK saying to “help” Klout in 500 Bi on gg. BK knew CSM being ghosted. BK set up ghost stars under fish. pic.twitter.com/wacG0szOfw

Let us bring you up to speed for those who have missed out on all that has happened.

On April 21, through a series of tweets, Zamani made damning accusations against Kenney of running a cult-like cheating ring on GGPoker. He then went on a podcast with none other than Doug Polk, stirring the controversy further.

Zamani shared that Kenney forced his ‘horses’ (players who he staked) to collude in satellites, ghosting, and use real-time assistance (RTA), mostly while playing on GGPoker and occasionally on partypoker.

Zamani’s claims also implicated other notable players like Sergi Reixach and David Miscikowski, who allegedly used RTAs, who were banned from GGPoker, and had colluded in thousands of online tournaments.

On April 26, Kenney agreed to an interview with PokerNews’ Sarah Herring, aka Aunty Chardonnay. Herring admitted that she’s a long-time friend of Kenney’s and stated that she had kept the discussion transparent and honest. In the interview, Kenney evaded providing straight answers to all the accusations against him and downplayed Martin Zamani’s credibility – “Martin’s a person that, through our conversations, has never been really happy in his life.”

According to a report by PokerNews, the site had obtained and authenticated thousands of Telegram text messages between Kenney and an accomplished poker pro. They verified the authenticity of the exchange on the condition of anonymity. The anonymous player was subsequently publicly outed as George Wolff by Zamani in a now-deleted tweet.

A close look at the conversation between Kenney and Wolff (transcripts of some of them shared below) clarifies that at least some of Zamani’s accusations against poker’s all-time money leader (Kenney) are true.

The Telegram chat log between the poker pros spanned more than three years. The timestamps appear to be presented backward, making some on social media understandably question their authenticity. Wolff explained that he recorded the conversation backward and sent it to Zamani via video chat.

On May 4, the whistle-blower in this story, Zamani, finally came out with some proof to back his allegations in his tweets. He told PokerNews that the screenshots were not from his phone. He clarified that he had “strong-armed” the screenshots from Wolff, although initially, he did not reveal Wolff’s name. At the time, Zamani stated he had an “interesting relationship with that person, and I don’t want to hurt their life in any way or get them banned,” so he wouldn’t publicly disclose the name. He eventually revealed Wolff’s name on Twitter late Wednesday night.

While Kenney had denied ghosting players or encouraging the players he backed to ghost other players during online poker games, Zamani’s latest evidence contradicts his statement. In the chat, which Zamani said took place in 2020, it appears Kenney acknowledged that he was aware of players assisting others at a final table and playing under another player’s account.

Kenney also wrote: “help klout in the 500 if ur not on too many tables.” According to Zamani, “klout” was one of Kenney’s horses, although he said he doesn’t know his real name and only had limited interactions with him.

PokerNews reached out to Kenney and reacting to Zamani’s tweet, the former said, “This is someone who has tried to blackmail me, scammed me for money, and has tried to recruit people to get dirt on me so he could use it against me for money. It’s a guy with dirt for a reputation, has been involved in multiple scams and been arrested for assault on a handicapped person.”

“Martin got cut out cuz he was harassing Scott margerson in the Aussie main event, was being super rude to people all over and I took a 350k loss in makeup to drop him which shoulda been sooner, and he still owes me 70k he borrowed off me. And he’s bitter I dropped him and has been trying to get dirt on me since then not being able to find much of anything.”

Regarding the tweet itself, Kenney stated: “I don’t think this is really any ‘proof’, he’s claimed rta, collusion, and ghosting. What does this pic show even if true that I asked one horse to help a player 1 time? Or that 2 guys I stake were in the same place once and one was helping the other, unprovoked by me … He alleged I ran a ghosting stable, this is one instance if these messages are real of me telling 1 person to help another person … This doesn’t show anything of me ghosting, plus I said on the podcast that I have helped people before in the past on very minimal occasions.”

While Kenney continues to deny all the cheating allegations, the evidence points toward some wrongdoing. Perhaps more will be revealed in the days to come.