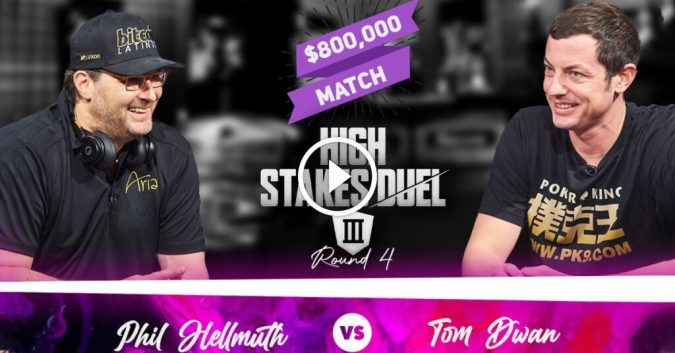 One of PokerGO’s most popular shows, High Stakes Duel, is set to return to the PokerGO Studio at the ARIA Resort & Casino in Las Vegas on May 12 for Round 4 of the High Stakes Duel III, with Tom ‘Durrrr’ Dwan exercising his option to a rematch with the 16-time WSOP bracelet winner Phil Hellmuth.

Phil Hellmuth, who’s been in the news a lot lately, tweeted about the upcoming match.

The High Stakes Duel competition has moved into uncharted territories as, for the first time, each player will be shelling out $400,000 each, and the winner will walk away with the entire $800,000 kitty. Like always, PokerGO will broadcast the entire match for its subscribers on its PokerGO app starting from 8 PM ET on May 12. The first hour of the match will be available for free on the PokerGO YouTube channel.

“Poker Brat” and “Durrrr” have an extensive history of competing against each other, and they have had an epic back-and-forth during High Stakes Duel III. Hellmuth had won seven straight High Stakes Duel matches, accumulating $750,000 in the process before Dwan stepped into the ring with him for Round 2 of the High Stakes Duel III. Dwan handed down Hellmuth his first loss in the competition on August 25 while simultaneously winning $100,000.

Hellmuth challenged Dwan for a Round 3 match and was able to exact revenge by taking him down on January 26. With Dwan opting for a rematch, the stakes have been raised to a never-seen-before $400,000 for each player.

According to the High Stakes Duel rules, the stakes get doubled every round. The match could theoretically go as far as an eighth round, with a $12.8 Million prize pool.

A player can walk away victorious if they win three consecutive matches before Round 4 or two consecutive matches starting from Round 4. This essentially means that regardless of which of the two poker superstars wins Round 4, there will be a Round 5 with each competitor paying $800,000, pooling in a winner-takes-all $1,600,000 prize pool. The loser of the upcoming match will get the first right to a rematch, but if they decline, a new player will be invited to step into the ring at those stakes.

Both Hellmuth and Dwan would need to win two consecutive matches starting with Round 4 to be eligible to walk away with the winnings. Will Hellmuth extend his winning record in the ring, or will Dwan find a way to beat him again? We will have to wait a few weeks to find out.