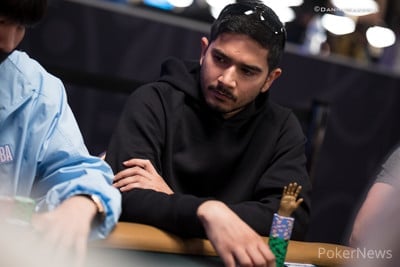 The 2022 World Series of Poker (WSOP) Event #49: $2,000 NLHE made its inaugural run at the annual series this year and needed an unscheduled fourth day to find a champion. Bulgaria’s Simeon Spasov (cover image) was the last player standing and toppled a 1,977-strong field to collect his career-first WSOP bracelet and a personal-best $527,944 in prize money.

Spasov had entered the final day as one of the short stacks but climbed up in contention over the event`s six-hour-long run on Sunday and eventually defeated Mike Watson heads-up, who will have to keep working to win that elusive bracelet.

Three Indians cashed in the event, and headlining them was Nathan Rao. Rao had been riding high since the opening day and was seventh in chips among 39 survivors at the end of Day 3. Rao eventually bowed out in 20th place after Ioannis Angelou Konstas’ cowboys outdid his ace-ten. Rao earned a career-best $18,930 (~₹14.84 Lakhs) for his efforts, his maiden cash at the WSOP.

Day 3 began with 39 survivors, and the ten-handed final table kicked into motion following the elimination of Brady Osterman (11th for $36,421).

An hour into Day 4, Evan Sandberg fell in seventh place at the hands of Daniel Custodio, who held ace-jack versus his queen-ten. Sandberg flopped a pair of queens, but Custodio won the pot after an ace spiked on the river.

In less than 30 minutes, Spasov dispatched Christopher Frank in sixth place. Frank jammed with pocket nines, and Spasov called it off with ace-queen. It was off to the races, and Spasov hit the Ace on the turn, ending Frank’s tournament run.

Spasov lost a pot to Ioannis Angelou Konstas but quickly chipped up after knocking him out in fourth place. The hand in question saw Spasov moving all-in from the button with pocket tens. Konstas called from the big blind with pocket queens that had Spasov dominated. Konstas had all but locked in a double-up after flopping a set, but Spasov rivered a straight to crush Konstas` bracelet hopes three places short of the finish line.

Three-handed play was slow-paced with the stacks deep, and the subsequent elimination took another two hours. Finally, Daniel Custodio gave way after jamming from the small blind for 6 Million, and Mike Watson called off from the big blind.

Custodio paired his ace on the flop to take the lead. However, Watson had outs to a gutshot straight. While the on the turn was a safe card for Custodio, Watson completed his broadway straight on the river, eliminating Custodio in third place.

Even after winning all of Custodio`s chips, Mike Watson was trailing Spasov at the start of the heads-up. The action went back and forth before Spasov began to pull away. Around two hours into the heads-up, the cards went on their back as Spasov shoved and Watson called for his tournament life.

The board panned out , and Spasov’s two-pair eliminated Watson as the runner-up, who will have to wait a little longer for his first bracelet.

Keep following PokerGuru for all the latest updates from WSOP 2022!