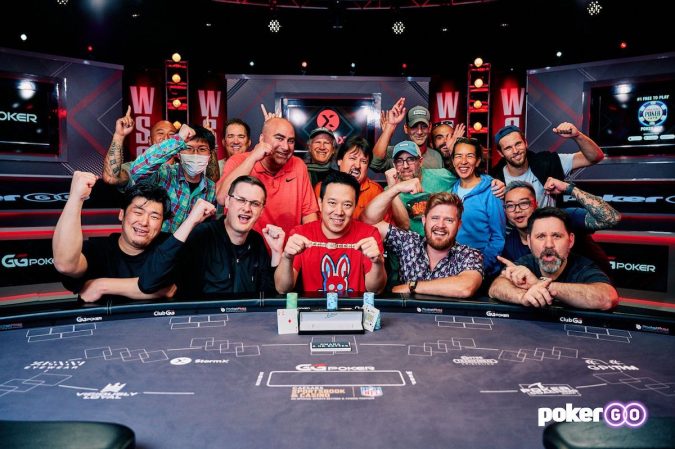 A packed day of action in the 2022 World Series of Poker saw Phil Hui lead the winners’ parade as he bagged his third bracelet in Pot Limit Omaha. He was the joined in the ranks of WSOP bracelet winners by Andrew Yeh who won an epic heads-up battle against Craig Chait to take gold for the first time. On a day where the $250,000 Super High Roller event also began, it was drama all the way at Bally’s and Paris casinos in Las Vegas.

Phil Hui staged a brilliant comeback to win Event #45, the $1,500-entry PLO event. At an eight-handed final table that contained 2022 WSOP bracelet winner Dylan Weisman and WSOP Main Event runner-up and gold holder David Williams, Hui used all his survival instincts to hang in there until a late rally gave him the title.

Play began at the eight-handed final table with Hui well below the average, but in a shock exit, the previously strong Weisman was the first to bust. Hui chipped up a little early on and would use those chips to bust Weisman. A period where Hui stayed steayd followed, as Shane Nardiello did a lot of the damage to players dreams, but Hui was on hand again to bust the other most experienced player at the table in David Williams, sending the poker legend home in sixth place for $58,606.

Once overnight chip leader David Prociak followed Nardiello from the felt, Hui fans were hopeful, but he still had a huge deficit to make up against Daniel Tordjman, who looked like he had timed his run into becoming chip leader to perfection. Sadly for his rail, that wasn’t the case as Hui doubled back into contention on multiple occasions before getting himself into a 5:1 chip lead. Hui, who denied Tordjman his first-ever bracelet in the process, was clinical as he finished off his opponent quickly and ended the event with a full house of sevens and eights, banking $311,782 and his third WSOP bracelet in the process.

Event #44 saw Andrew Yeh claim gold on the PokerGO stream as he beat Craig Chait to the WSOP bracelet as the two potential first-timers played out a thrilling heads-up clash in the Thunderdome.

At a final table that also contained John Racener, Bryce Yockey and Philip Long, Yeh and Chait were perhaps the less-fancied pair to make heads-up when the five-handed final table began. But under the lights in the studio, PokerGO Fans were able to watch a thrilling denouement to the event where Yeh put his name in lights and claimed a memorable first-ever bracelet event victory.

Spanish player Adrian Mateos won the corresponding $250,000 Super High Roller event at last year’s World Series of Poker for $3.2 million. With Day 1 of this year’s event in the bag, Event #50, the four-time WSOP bracelet winner has the lead again.

On a busy day at the felt in the biggest buy-in event of the 2022 World Series of Poker, Mateos built an incredible chip lead, with his 9,745,000 chips way ahead of second-placed Phil Ivey, who bagged up 6,830,000 after another impressive day at the felt.

Other big names also grabbed big stacks and made the top 10, but in fairness, no-one came close to Mateos and Ivey, who between them have as many chips as their nearest four rivals combined. Dario Sammartino continued his strong series by bagging up 4,835,000, while Nick Petrangelo (4,500,000) and Dan Zack, the current POY leader, piled up 4,445,000 to round out the top five.

With 52 entries overall, just 30 players survived Day 1 at the felt, but with registration extended to the start of Day 2, players will have the option of buying back in or entering for the first time. Among those to bust on Day 1 and ponder a re-entry are Dan Smith, Chance Kornuth, Scott Seiver, Michael Addamo and Brandon Steven.

Event #46 saw Stephen Song build one of the biggest leads going into a five-handed WSOP final table in history as he piled up 23,320,000 chips, more than his four final table opponents combined. With a huge chip lead over nearest rival Tamer Alkamli (8,710,000), Song is looking like a strong favorite to win what would be his second WSOP bracelet, with the only other previous winner at the felt, Elio Fox, holding 5,635,000 chips.

In Event #47, the $1,000-entry Seniors Championship saw its biggest ever field reached as a total of 7,188 entries across both yesterday’s Day 1a and today’s Day 1b saw a prizepool of $6.3 million reached. That means a top prize of $694,909 is up for grabs to the winner and with big names making the cut on Day 1b, an entertaining finale to this event is guaranteed.

Big names to bag big stacks included the 2019 WSOP Player of the Year, Australian Robert Campbell (1,229,000), who ended the day seventh in chips, with Adam Friedman (12th on 1,027,000) still in the hunt. Just 16 players survived from the 200 who began the day, with others such as Daniel Weinman, Matthew Schreiber and Mel Judah all crashing out before the close of play.

On a day of over 1,600 eliminations, 2009 world champion Joe Cada, Kenny Hallaert, Calvin Anderson, Anatoly Filatov, and Matt Stout all bit the dust.

PokerGO is available worldwide on all of your favorite devices, including Android phone, Android tablet, iPhone, iPad, Apple TV, Roku, and Amazon FireTV. You can also stream PokerGO on any web or mobile browser by going to PokerGO.com. For a limited time, you can save $30 off an annual subscription by using the code “WSOP30” at checkout.